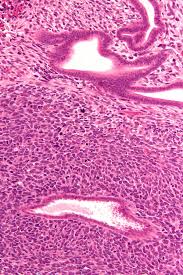 Journal of Cancer Research and Immuno-Oncology is an open access rapid peer reviewed journal in the field of cancer research. Here we discuss about Adenosarcoma || Types and Treatment.

Adenosarcoma (also Mullerian Adenosarcoma) is a rare malignant tumor that occurs in women of all age groups, but most commonly post-menopause. Adenosarcoma arises from mesenchymal tissue and has a mixture of the tumoral components of an adenoma, a tumor of epithelial origin, and a sarcoma, a tumor originating from connective tissue. The adenoma, or epithelial component of the tumor, is benign, while the sarcomatous stroma is malignant. The most common site of adenosarcoma formation is the uterus, but it can also occur in the cervix and ovaries. It more rarely arises in the vagina and fallopian tubes as well as primary pelvic or peritoneal sites, such as the omentum, especially in those with a history of endometriosis. The rare cases of adenosarcoma outside the female genital tract usually occur in the liver, bladder, kidney, as well as the intestine and are typically associated with endometriosis.

The standard care of treatment is total abdominal hysterectomy with bilateral salpingo-oophorectomy. Lymphadenectomy is usually not performed as the incidence of lymph node metastasis is rare. There is no standardized chemotherapy, hormone therapy, or radiation therapy. Because of the rarity of adenosarcoma, there is limited data to guide treatment decisions, particularly in regard to recurrent or metastatic tumors. Chemotherapy may be considered in patients with recurrence or tumors unable to be completely removed through surgery. It has been suggested that uterine adenosarcomas can respond to doxorubicin/ifosfamide and gemcitabine/docetaxel chemotherapy. The use of hormone therapy in recurrent or metastatic disease is limited to case reports.

Typically, ovarian adenosarcomas are surgically removed via salphingopherectomy or panhysterectomy. 67% of patients had tumor rupture at or before excision. There is no standardized chemotherapy, hormone therapy, or radiation therapy due to limited data

Mainly consists of total abdominal hysterectomy, occasionally with additional radiotherapy and chemotherapy. Prognosis of cervical adenosarcoma is usually favorable, with metastasis and recurrence of the tumor being less common. As with uterine adenosarcoma, the depth of myometrial invasion determines the prognosis, with deeper invasion being associated with metastases and tumor recurrence.

Journal of cancer research and immune-oncology announces papers for the upcoming issue. Interested can submit their manuscript through online portal.

Submit manuscript at https://www.longdom.org/submissions/cancer-research-immuno-oncology.html or send as an e-mail attachment to the Editorial Office at cancerresearch@clinicalres.org

Journal of Cancer Research and Immuno-Oncology

HLA-matched stem cell donors can remain unidentified due to stimulation